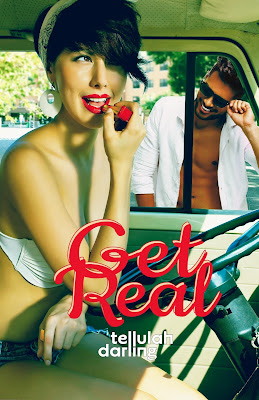 Get Real is a New Adult romantic comedy with sass, sex, and swoon, set in the world of “Cadabras"–humans with magical powers.

Francesca Bellafiore is a good Jewish girl, living up to family expectations that she use her magic to heal others. Underneath, she’s a wannabe badass with her heart set on becoming a detective and solving magical crimes. But nice girls don't disappoint their moms.

Party boy Rafael Muñoz does everything possible to publicly disappoint his high profile father. Privately, it's a different story. His carefully crafted bad boy reputation masks the fact he’s a master illusionist, forced into solo covert ops. The role is wearing thin and Rafael longs to be part of a team.

When Francesca meets Rafael at a friend's party, she's taken by the sexy stranger. Until he speaks. Beautiful plumage doesn't compensate for spectacular ego. Rafael finds Francesca's sweetness a turn-on. For about five minutes. Judgmental golden girls are more trouble than they're worth. Then a terrified girl with reality warping powers, locked and loaded on their destruction, whisks the pair to Manhattan. Francesca and Rafael are caught in a web of magic, minions, secrets, and enough sexual tension to power NYC. Desperate to prove themselves, their only chance to save the city and survive is to team up, trust each other–and maybe even fall in love.

Provided they don't kill each other first. 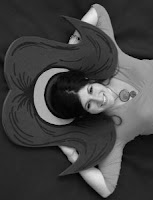 Bio:
Tellulah DarlingnounSassy girls. Swoony boys. What could go wrong?1) YA & New Adult romantic comedy author because her first kiss sucked and she's compensating.
2) Firm believer that some of the best stories happen when love meets comedy and awkwardness ensues.
3) Sassy minx.
Both a hopeless romantic and total cynic, Tellulah Darling is all about the happily-ever-after, with a huge dose of hilarity along the way. Her romcoms come in a variety of flavours and heat levels.

Get Real Teaser
POV: Rafael
I shoved my hands into my pockets, jiggling the loose change and wanting some kind of confrontation. I stepped outside. That girl with Byron who’d been staring and laughing earlier was candidate numero uno. Want to diss me? Do it to my face, chica.
I found her healing a gash on some guy’s cheek, holding a vase in her free hand while berating him for his choice in headwear. “Va bene. Go,” she ordered.
He slunk away with a sheepish look and I stepped up, my shadow falling over her.
“If you need medical services it better not be alcohol poisoning because I will not let you enjoy it.” She turned. Her fingers tightened on the rim of the vase at the sight of me.
“Hi,” I said.
She raised her chin, regarding me levelly with these amazing dark brown eyes. “It’s you.” Her sexy Italian accent hooked into me.
“Apparently.”
She fumbled the vase.
We both grabbed the same edge before it could hit the ground, my hand landing on hers. Her skin was cool and smooth. The rest of her was twitchy and flustered. It cheered me up in a petty way.
“Rafael. Call me Rafa. Official friend of the Byron–Jones hook up.” I patted my shirt down with my free hand. “I had a badge but I lost it.”
“Next time ask for a lanyard.” She tugged the vase away with a slight smile, tucking it under her arm like a football. What a mouth. ¡Dios mío! “I didn’t buy tickets to the event,” she said.
I pretended to look stern, mostly because I wanted to check her out some more. “You boycotting the games?”
That got me a full–on grin, which hit me in the gut. Who was this girl and how had I never seen her before?
“Seen one game, seen them all,” she said. She walked briskly past me back to the swing she’d been sitting on earlier and set the vase on the table.
I followed, sinking into the chair beside her. “You know my name. It seems unfair I don’t know yours.”
She hesitated for long enough that I wasn’t sure she was going to answer with anything other than “get lost.” “Francesca,” she said at last. She flicked her bangs off her forehead. “My mom works for your dad. You’re Javier’s son, right?”
Those words were like a douse of cold water. “Yeah.” I waited for her next words. Her next look. Her obvious disdain. I stiffened, reminded of why I had come out here in the first place and ready to rip into her.
“She’s a Liaison.” Even for the simplest of sentences, her hands gestured madly. Cute. “Mirella
Bellafiore.”
My heart sunk. Now I knew exactly who she was. And wished I didn’t. Francesca Bellafiore, golden girl. Latest pride and joy of the Bellafiore clan and totally off–limits to me. Javier would freak, which would be fun, but honestly? Good girls weren’t my thing. “Yeah, sure. I’ve met her. Guess you’re excited to start all that healing stuff.”
Disappointment and contempt? flickered in her eyes. Apparently hot girl and I were natural enemies. Figures. I wasn’t about to be an asshole to her though. It would ruin my façade.
I was about to make my excuses and go, but I noticed her twisting this hideous bracelet tighter and tighter into her arm. “You okay?”
Her hand stilled. “Are you reading me?”
“No,” I said with exaggerated patience. “I don’t go around reading everyone I meet. Don’t need to most of the time. People telegraph enough on their own.” I nodded at her reddened skin. She jutted her chin out. “People shouldn’t take everything at face value.”