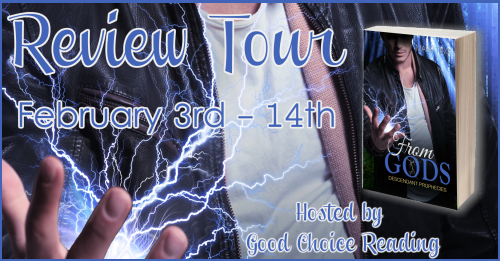 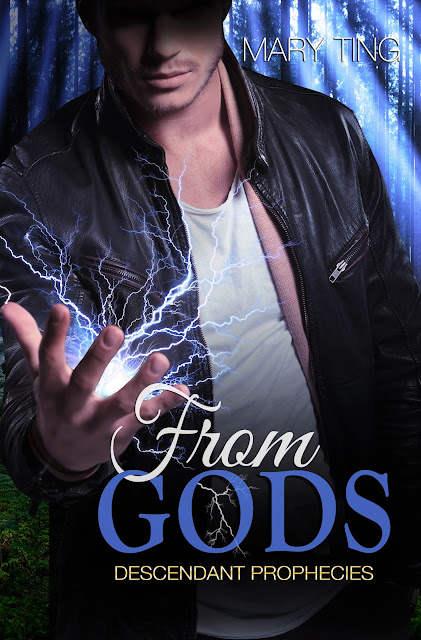 Did you just see a flash of lightning across the sky on a clear sunny day? Don’t blame Mother Nature.

Skylar Rome should have been having the best summer ever, before heading off to college. Suddenly her whole life changes while visiting her cousin, and meeting the Grand brothers; Mason, in particular. Though she’s sure he is someone she should stay away from, the attraction was undeniable.

Strange things begin to happen, throwing Skylar’s life into turmoil. Implausibly, she gets caught up in a world where the descendants of ancient gods have super powers, and evil beings are after her. Not only are her discoveries difficult to accept, but now she is running out of time and running for her life, while trying to unravel the mystery of what they want from her.

Forced into a battle set into motion long before she was born, will Skylar find the answers she seeks, or will she die trying?

Praise for FROM GODS

"A fast paced adventure full of mystery, action, magic and romance! Readers won't be able to put this book down!" InD'tale Magazine

"A story that is Electrifying with love. Get ready to be shocked!" Janie, Crossangels

"From Gods takes mythology to a whole new level of imagination with its incredible plot and amazing characters. It's full of hotness that you never want to end!" Michele, Insane About Books

"From Gods by the AMAZING AUTHOR Mary Ting﻿ is OMGods good!! If you even LIKE Greek Mythology, set aside some time because you will DEVOUR Mary Ting's Demi Gods and Vultures!!!" Mindy, Books Complete Me

"This book is "electric" as it blends paranormal romance, mythology (which I love), action and suspense together for an amazing read. Mary Ting, you've done it again! This book exceeded my expectations and I was literally blown away as if I were struck by lightning!" Vanessa, Fairiechick's Fantasy Book Reader 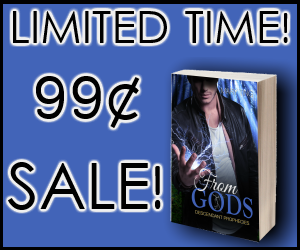 February 10th
The Wonderings of One Person

February 14th
Once Upon A Twilight (http://www.onceuponatwilight.com)

Mary Ting resides in Southern California with her husband and two children. She enjoys oil painting and making jewelry. Writing her first novel, Crossroads Saga, happened by chance. It was a way to grieve the death of her beloved grandmother, and inspired by a dream she once had as a young girl. When she started reading new adult novels, she fell in love with the genre. It was the reason she had to write one-Something Great. Why the pen name, M Clarke? She tours with Magic Johnson Foundation to promote literacy and her children’s chapter book-No Bullies Allowed.