We're putting together a review tour for author Breeana Puttroff series Dusk Gate Chronicles book one and two, Seeds of Discovery and Roots of Insight.

The author has reached out to us and asked us to help spread the word about her series.

The review tour will be taking place on February 11th - 22nd (Monday - Friday only).

We're looking for bloggers who are interested in reviewing book one or two, or both, if interested. The author would like a mixture of both, so if anyone has already read the first book in the series let me know. (BOOKS ARE SENT TO PARTICIPANTS IN EBOOK format only)

There will be a grand prize giveaway for the tour.

Only requirement for this tour is that you post your review on Amazon, GoodReads and your blog.

Here is a little bit about Seeds of Discovery and Roots of Insight... 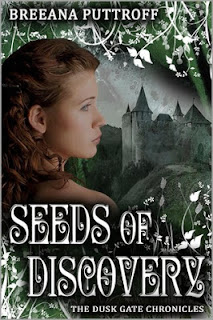 Quinn Robbins' life was everything she thought a teenager's should be. She has good friends, a family that she loves, good grades, and an after-school job she enjoys. And, she's just been asked out by Zander Cunningham, a popular football player and great guy. But one day when driving home after picking up her little sister from the baby-sitter's, she nearly hits a boy who, after running blindly into the street, mysteriously disappears.

The mystery only deepens as she figures out who the boy is; William Rose, a reclusive, awkward boy from school who always has his nose in a pile of books. As she becomes more aware of his behavior it becomes more obvious how out of the ordinary William is and how hard he deliberately tries to blend into the background. This only intrigues her more and she finds herself working to find out more about him, and exactly where he keeps disappearing to.

On a whim one night she follows him and suddenly finds herself in a new world. One where William is a prince, literally, and she is treated like a princess. She also discovers that she is stuck; the gate back to her own world isn't always open. Quinn finds herself smack in the middle of a modern-day fairy tale, on a course that will change her life forever.

Quinn Robbins has just returned from spending ten days in Eirentheos, a world she had never known existed. Trying to settle back into her familiar life and establish a relationship with her new boyfriend, Zander, is more of a challenge than she ever dreamed it would be.

Things are just beginning to feel normal again when Thomas shows up in her world, and invites her back to Eirentheos for a royal wedding. She's excited at the chance to reconnect with the people and places she had begun to fall in love with.

What she doesn't realize is just how deeply connected with this new world she might become ... and just what old secrets might be beginning to unravel.

The second book in the beloved Dusk Gate series reconnects Quinn with the charming princes, and the pristine world of Eirentheos. From a beautiful royal wedding to a dangerous rescue mission, Quinn's adventures are about to take her life on a course that will change it forever.


If you would like to participate on this tour, please fill out this FORM.