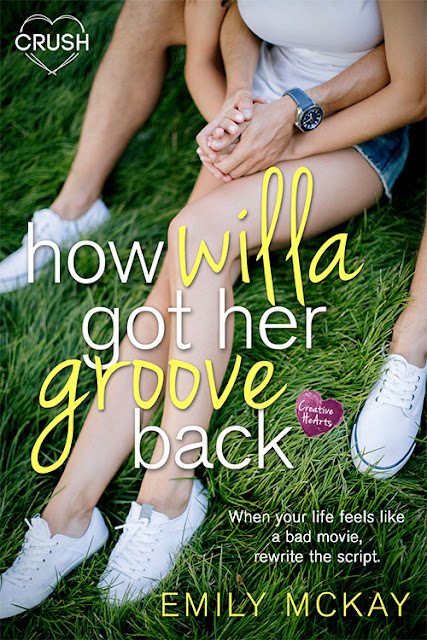 When your life feels like a bad movie, rewrite the script.

When Willa Schofer's father comes home from a business trip with an über-famous new fiancée, Willa's senior year blows up in paparazzi-fueled flames. Overnight, she has a new house, a new car, and a new soon-to-be stepbrother--the unbelievably hot, unbelievably arrogant, Finn McCain. Thank god he's constantly pushing her buttons, or she might do something irresponsible. Like fall for the jerk.

Just when Willa's decided to avoid him for, oh, ever, Finn lands in the center of her senior project team. Seriously--how hard is it to shake a guy? At least her work on the project snagged the attention of the (second) hottest guy in school. He might only be into her because of her famous stepmom, and he's not quite as exciting as a certain annoying housemate, but at least she's allowed to crush on the guy.

Because crushing on your annoying stepbrother? So not cool.

Emily McKay is a life-long fan of books, pop-culture and anything geeky. She has a black belt in Tae Kwon Do and baking cookies. When she’s not kicking-ass and scooping cookie dough, she’s watching videos from Screen Junkies (her favorite Youtube channel) or Pemberly Digital or Classic Alice. Okay, she has a Youtube problem! She’s seeking help. Really. Though, she may also have a slight problem with procrastination.

When the internet is down and there are no chocolate chips in the house, she does write books – everything from Harlequin romance novels to post-apocalyptic YA. Though her interests may appear broad, the common denominators are swoony heroes and snarky humor.

February 23rd
Addicted to Books
Worth Reading It?
Books are Love
To Borrow or Buy
Book Jems

Missed:
Confessions of a YA and NA Book Addict, http://confessionsofayaandnabookaddict.blogspot.com
The Shadow Realm, http://xtheshadowrealmx.blogspot.ie

Email ThisBlogThis!Share to TwitterShare to Facebook
Labels: Entangled Publishing, How Willa Got Her Groove Back Blog Tour, Romance, Young Adult